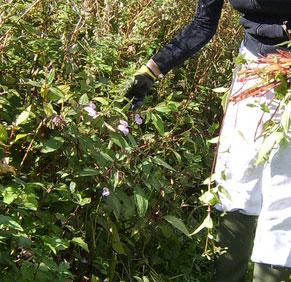 Despite its soothing name, this densely growing pink and red-stemmed weed stifles any native grasses and plants in its path

Himalayan balsam is a native of the western Himalayas. Introduced to Britain in 1839, it escaped from gardens and rapidly colonised river banks and areas of damp ground.

It is the tallest annual plant in Britain, growing up to 3m high. The characteristic purplish-pink slipper-shaped flowers appear in June.

Himalayan balsam plants grow in dense stands that suppress the growth of native grasses and other flora. In autumn the plants die back, leaving the banks bare of vegetation, and therefore liable to erosion.