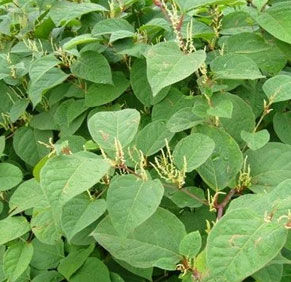 One of the most invasive weeds in Britain, the Japanese Knotweed’s dense growth crowds out native vegetation, erodes riverbanks and causes structural damage

Japanese knotweed was first brought to Britain in the mid-nineteenth century as an ornamental garden plant. Since then it has caused serious problems in a range of habitats – particularly roadsides, riverbanks and derelict land – by displacing native flora and even causing structural damage.

Every year, Japanese knotweed causes £150 million worth of damage and disruption throughout the UK.

In 2010, the government licensed the release of a biological control against Japanese knotweed.